As early as 1840, Darjeeling attracted the attention of European botanists for the variety of its plant life. One may suppose that, after all this time, there were no Darjeeling plants to be identified, categorised, and to be given root elsewhere. It therefore, comes as a surprise to read the following account in the Journal of the International Palm Society.

"It was Henry Noltie of the Royal Botanic garden, Edinburgh who first alerted us to the existence of a strange Trachycarpus in Darjeeling, India. He had been in the area during the Royal Botanic Garden Edinburgh Sikkim Expedition in 1992 and had noticed a pair of these trees in the garden of the famous Windamere Hotel (oldest colonial hotel in India). He took photographs and collected specimens, but our later examination of these at Kew provided no clue as to the identity of this palm, other than that it appeared indeed to be a species of Trachycarpus".

As visitors to Darjeeling and Sikkim discover, the hills and valleys provide a feast for the eyes with not only varieties of palms, buta profusion of flowering plants and shrubs, many species of trees, many kinds of orchid and rhododendron, and cascading waterfalls and rushing mountain streams. The Darjeeling hills remain a gardener's delight! 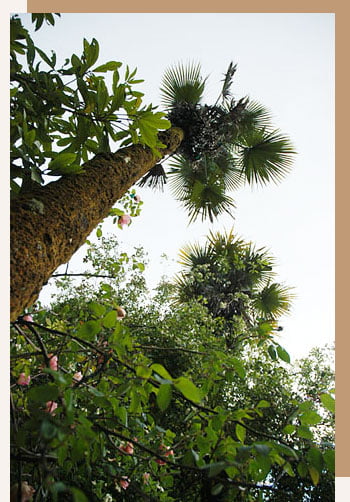