"Windamere offers the old Christmas & New Year traditions, along with 100% professional entertainment from The West End Stage District of England and other stars from Canada, USA & Australia. We are fortunate to engage such talent! One guest was overheard to say: "it's just a good old house party!"".

Note: in the old days, such house parties were very popular!

"Christmas Week at Windamere", which runs from 18th December to 1st January every year, has been celebrated at the hotel, in the same way, without interruption, since 1939.

It has been a tradition for well known entertainers from London's famous West End Theatre District, to entertain at Windamere Colonial hotel in Darjeeling during Christmas week. In recent years, the words and music of headline entertainers from Australia, New Zealand, Canada, America and France have also enthralled Windamere audiences".

Have a look at Windamere Christmas celebration in the past

Mr. Muus and myself, had such a good time at Windamere last X’mas that we simply have to spend our 1941 X’mas there too, if we shall still be alive and in India at that time.

Will you therefore please reserve one room with bathroom for each one of us; it would be appreciated if we could have the same rooms as last year, with the sitting room in between.

We intend to arrive in the morning of 24th December and to leave on 1st January. 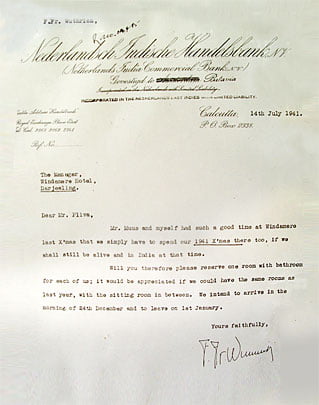