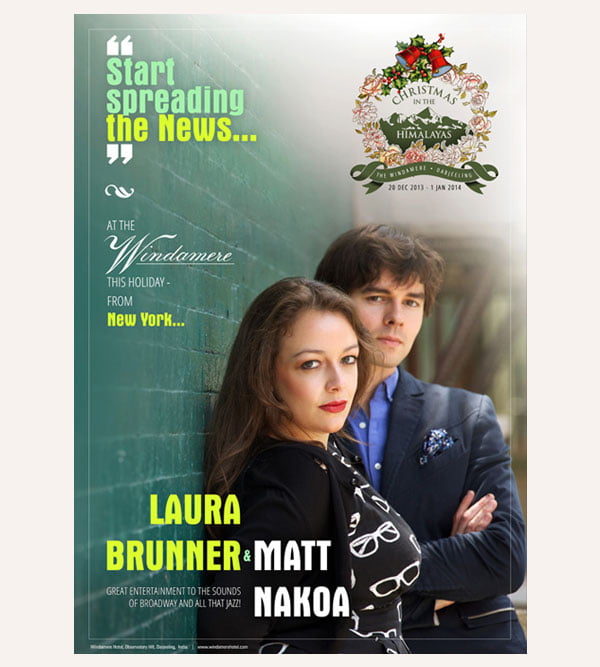 Two of America's Finest Musical Talents Presenting you the music of Motown, Jazz, Blues, Rock, Broadway and some of your favourite songs.

Laura Brunner
"With a voice smooth as velvet and a hold vibrant musicality, vocalist and composer Laura Brunner is one of the most exciting creative voices in music today."

Matt Nakao
"With a soaring three-octave vocal range and a piano virtuosity rarely matched, Matt Nakoa proves himself one of the most talented young musicians coming up today."

With a voice smooth as velvet and a hold vibrant musicality, vocalist and composer Laura Brunner is one of the most exciting creative voices in music today. Laura proves herself, not just as a singer, but a musician, using every part of her vocal capabilities and her incredible ear for phrasing and harmony, to put her own stamp on every song she sings. Laura is perhaps best known for her skill in vocal improvisation, or scat singing. "With her multi-instrumental background, Laura approaches improvisation with a rhythmic sophistication and vocal dexterity unmatched by many of her contemporaries. Her versatility and unusual style consistently leave audiences asking for more.

Laura has shared stages, around the world with an extraordinary array, of musicians such as Kurt Ellings, Ellis Marsalis. Sheila E. Esperanza Spalding. Bryan Baker, and the Colombus, Symphony, Orchestra. Past performances include The Montreux Jazz Festival. The Beantowm Jazz Festival, The Boston Pops Jazz Festival, The International Association of Jazz Educators Convention, and the Betty Carter Jazz Ahead Arts in Residence Program as the John F. Kennedy National Center for the Performing Arts. Laura was also awarded First Runner Up in the prestigious 2012 Jazzmobile Vocal Competition in Harlem. In addition to live performances, Laura has been a featured artist on Boston s 89.7 WGBH National Public Radio and on Break Thru Radio's The Jazz Hole."

With a soaring three-octave vocal range and a piano virtuosity rarely matched, Matt Nakoa proves himself one of the most talented young musicians coming up today. His vocal style weaves seamlessly between Classical, Blues, and Rock with an incredible musical sophistication. His piano chops span all styles of music from Classical, to Jazz, to Rock, and Boogie-Woogie. This prowess has catapulted him to the top of New York music scene where he has performed his music in the premier venues in the city.

For the last few years Matt has been the main performer at Brandy LS Piano Bar, one of New York City best Piano Bars, hosting two nights a week. His show is unlike any other with an unusual library of great sing-alongs and an artful presentation. In 2012 Man released his full-length debut album Light in The Dark." He has been touring the USA and has released a music video of his single! Beggar By the Weekend”, which can be seen on Youtube. He is currently working on his new album A Dozen Other Loves", set to be released fall of 2013, while he continues to play all over the United States.