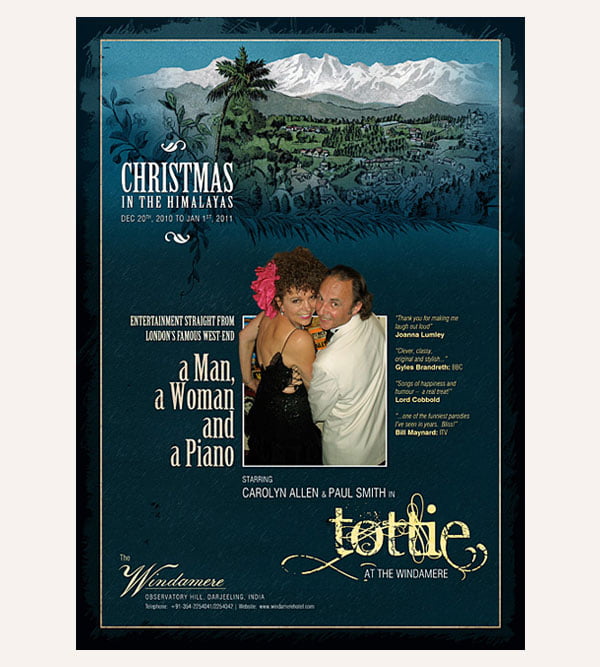 "Tottie at the Windamere"

“Thank you for making me laugh out loud!” said Joanna Lumley, the famous London stage and television actress. (We feel that this remark captures our wonderful entertainers for this year).

"Clever, classy, original, stylish – and, Carolyn is dead sexy too. All this, and Cole Porter too! To say nothing of Bizet... who could ask for anymore", wrote Gyles Brandreth, the well known writer, BBC broadcaster, acclaimed ceremony host and former MP and Government Whip. 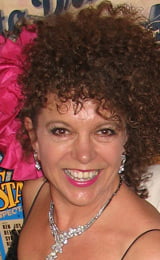 ...has appeared in the smash hit series of 'Only Fools and Horses' (as Vonny, the sexy stripper and snake charmer) and 'New Tricks' (as 'Carole', one of the many ex-wives of the actor, Dennis Waterman).  Her West End Stage credits range from Ray Cooney's famous farces:  'Two into One' (as Jenny Bristow) and 'See How They Run' (as Ida).  Carolyn is a very well known Music Theatre performer;  her credits range from 'Joseph and His Amazing Technicolour Dream Coat';  'Les Miserables' (as Madam Thenardier); 'Pirates of Penzance' at the Drury Lane Theatre (as Edith) and in Opera Della Luna's production of 'HMS Pinafore' (as Hebe).

Whether singing opera, sending up the latter or launching into musical comedy, her style is extremely engaging, enticing, romantic and most of all, highly entertaining! 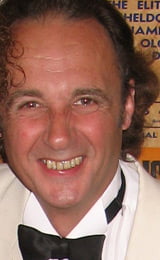 ...on the other hand, Paul began his career playing for cabaret acts all over Europe and America. Musical direction, musical arrangement and conducting are all part of his portfolio.  In 'Opera Tottie', he is a most willing accomplice in the thrust and banter of the show.

He has been very busy working in the West End Theatre District as a Musical Director ("MD") for such shows as:  'Godspell'; 'Stop the World I Want to Get Off'; 'Oklahoma'; 'Rosencrantz & Guildenstern are Dead at the National Theatre' and 'Paint Your Wagon'.

Paul has also enjoyed three wonderful years working with the famous 'Danny La Rue', in the capacity of  MD for both live stage and television performances, as well as MD for 'Ronnie Corbett' and 'Anthony' Newly.

He has conducted concerts for many other famous stage and television personalities too numerous to name and he is also very highly regarded for his specialisation in Victorian Music Hall, where for the past fifteen years, he has been  playing regularly at the 'The Players Theatre', London.