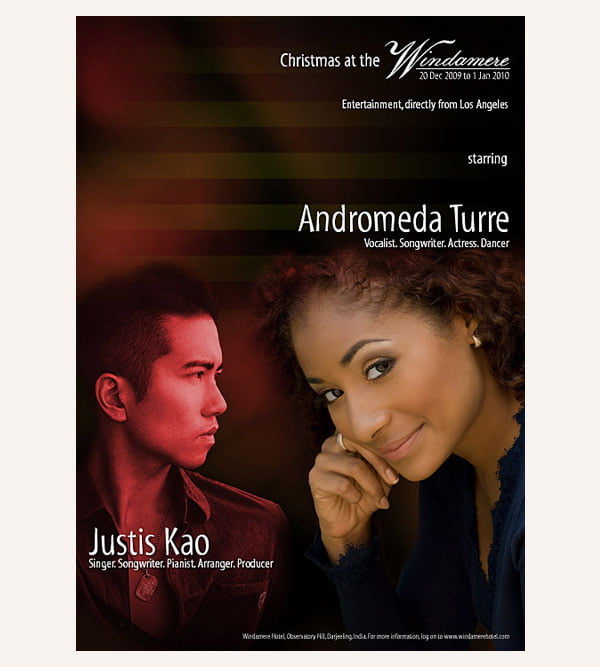 The Windamere is thrilled to bring to you this year, straight from the spotlights of Los Angeles,
the entertainers Andromeda Turre and Justis Kao: 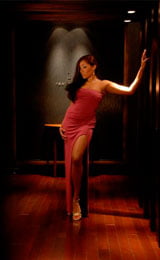 Andromeda's professional career started with Ray Charles as a background vocalist or "Raelette".  During her time with the Ray Charles Orchestra she was promoted to vocal director and arranger while performing as the lead Raelette.  After working with Mr. Charles, Andromeda was hired as the lead vocalist for the J.C. Hopkins Biggish Band where she sang jazz standards and J. C.'s Grammy award-winning original tunes from New York to LA.  She also acted as ''Rose'' in J. C.'s play "Rose does Rico".

Andromeda went on to star in Woody Allen's "Murder Mystery Blues" at the Midtown Theater in New York in which she was acting, singing, dancing and playing the piano during the show.  Andromeda's studio credits include several commercials, background vocals / songwriting / producing on several albums and featured vocals on the film score for Cafe and Tobacco, which won a Moondance International Film Festival Award.

An international success, Andromeda has performed across America, the Caribbean, Europe and Asia. She was featured as the "Queen of the Blues" singing with the Jazz Big Band at Tokyo Disney in Japan for 14 months. While there she recorded her debut album "Introducing Andromeda Turre" which was up for a 2008 Grammy for Best Vocal Jazz Album. The self-produced album contains four original songs and several jazz classics all arranged by Ms.Turre.

Andromeda has formal training in Vocal Performance / Music Business from Berklee College of Music, Theater from the Boston Conservatory and Dance from Alvin Ailey and Dance Theater of Harlem. She also studied piano and composition with Sonelius Smith and voice with Marni Nixon.

After a successful tour in Italy, Andromeda is looking forward to performing there again this fall.

And here are some key press quotes about Andromeda: 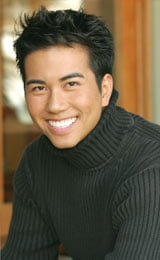 Justis Kao blends the sounds of Pop, R&B, Gospel, Jazz and Funk to create music that inspires the soul. He won Best Male Singer/Songwriter for the 2006 Los Angeles Music Awards. Justis is currently working on writing for his full-length debut album due out later this year.

"I write because I want to express through music what I often don't know how to soy. Music is the one thing that transcends all racial, ethnic, cultural and language barriers. As a singer and songwriter, I hope that my voice and music might be able to encourage others to live life full of dreams and passion that would inspire this generation ."

Originally from Toronto, Canada, Justis graduated with a degree in Contemporary Writing & Production from Berklee College of Music in Boston. Trained as a classical pianist but influenced by the sounds of Gospel, Jazz and Rhythm & Blues, Justis' music has been likened to the sounds of Brion McKnight, Stevie Wonder, and Babyface. In January 2008, Justis was invited to sing at the New Baptist Covenant Celebration held at the Georgia World Congress Center with President Jimmy Corter & President Bill Clinton.

PRESS QUOTES
"Justis Kao's charismatic singing voice grabs me from the first note. His compositions evoke feelings of Stevie Wonder and classic R&B. He's a winner for me!
Bob Katz, Mastering Engineer for the 2003 Invisible album

"Justis Kao is a wonderful musician who has multi-faceted skills: he's a fine vocalist, songwriter and a keyboardist who creates intricate figures and interesting harmonies that compliment his silky, mellifluous voice"
Jock Perricone, Songwriting Choir, Berklee College of Music