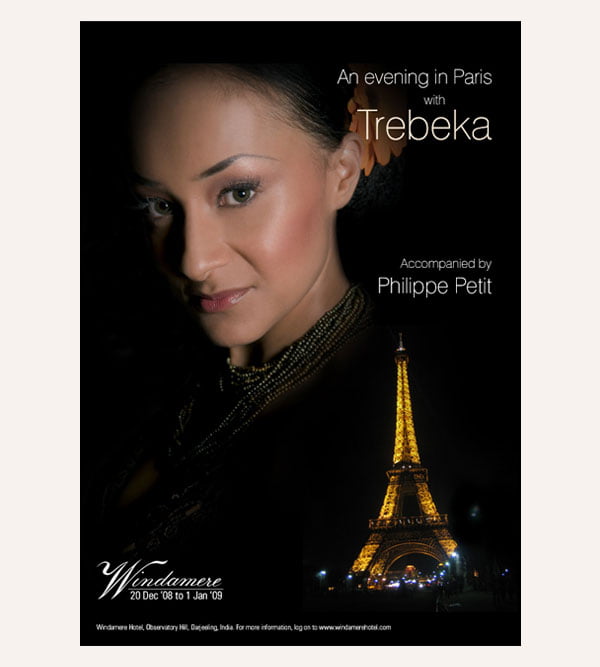 An evening in Paris - with Trebeka

Presenting TREBEKA - Entertainer to the World

We are excited to bring to the Windamere for your enjoyment, an entertainer who is so popular that she is booked solid for one year in advance, with no fewer than 235 musical engagements a year.  Her engagements take her to Paris, New York, London, Quebec, Beijing, Tokyo, Dubai, Bangkok, Santiago de Chile, Quagadougou, Singapore... and, now, to Darjeeling, for Christmas at the Windamere!... she is, truly, one of the busiest and most beloved of vocalists on the international entertainment circuit today. 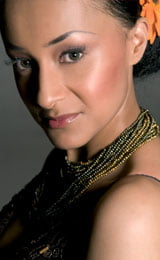 Born and raised in France in a multi-ethnic family rooted in Africa, Asia and Europe, Trebeka derives  her innate musicality and unique talent from an extraordinary fusion in herself of the aesthetic impulses of the East, the West, and Africa. To share joy and to give happiness through song, was her birthright. Her grandfather, a man of letters, was drawn to all forms of artistic human expression.  Her Cameroonian father is a guitarist and vocalist. Her French mother graced the professional dance stage for twenty years.  Her brother is a tour manager and her cousins are music producers and performers.

Trebeka first came to prominence in Paris when she was just eighteen, appearing regularly with her own ensemble in the city’s jazz clubs and music festivals.  She worked with established stars including Catherine Lara, Pascal Obisco, Cheb Mami, Manu Dibango.  Along the way she discovered that she also had the great gift of song writing.  It did not take long before Warner, very impressed, awarded her a four year publishing contract.

In 2003, Trebeka moved to London, set up her own jazz band there with the best musicians in town, and began her flight to the stars. She has jammed on stage with Kenny Garrett (Miles Davis), and found the time earlier this year, to record and release her first album 'Willow Weep For Me' with famous Grammy award winner, producer and musician Lonnie Plaxico (Cassandra Wilson, Jack Dejohnette, Dizzy Gillespie...)  and the Lonnie Plaxico Group in New York city.