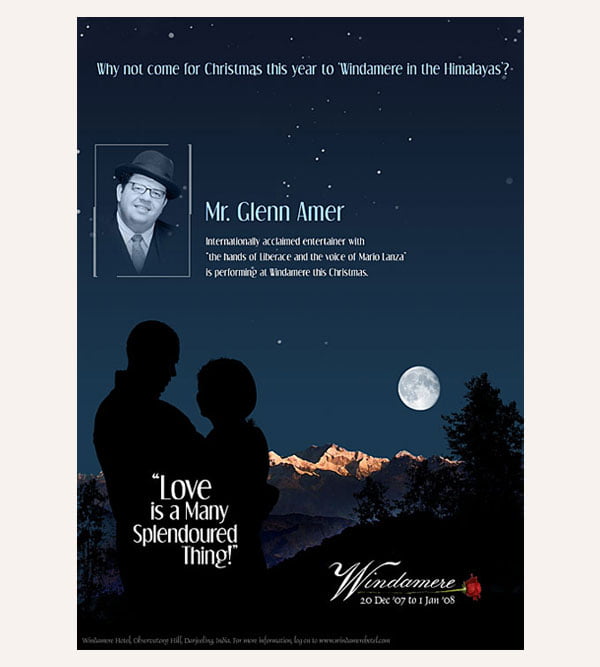 "Love is a Many Splendoured Thing!"

Why not come for Christmas this year to 'Windamere in the Himalayas'? It may be an experience of a lifetime. 'Windamere' is nestled on Observatory Hill in beautiful Darjeeling, long known as a place of mystery and romance where the Gods reside. The hotel has been famous for its entertainment since 1939.

Windamere is privileged to present this year as its featured entertainer Mr. Glenn Amer.

To hear him, whether for the first time or the tenth, is to know that the music critic had it exactly right when he said that Glenn had "the hands of Liberace and the voice of Mario Lanza". High praise indeed!

Glenn is a major headline entertainer on posh cruise lines including the Royal Caribbean, Radisson, Silver, Celebrity, Crystal, Norwegian, Orient, Holland America, NHK, Saga and Seabourne. With them, he has sailed to Indonesia, Singapore, Thailand, Noumea, Hawaii, Samoa, Fiji, Japan, China, Tahiti, The Cook Islands, Kiribati, New Zealand, Norfolk Island, and all Australia. Talk about the music of love at Bali Ha'i under tropic skies in the far South Pacific! Talk about starlit nights at the ends of the earth beyond Down Under! Eat your heart out, James Michener.

Born in Sydney, Australia, Glenn studied at the Sydney Conservatorium of Music between 1986 and 1993, and is a pianist, singer, operatic/choral conductor and organist. He also studied composition, clarinet and horn. At the age of thirteen, he was invited to London to study with, and participate in the studios of Geoffrey Parsons (piano) and Erich Vietheer (voice).

Glenn’s repertoire encompasses a variety of styles - he is equally at home playing a major Bach organ or a popular work by Burt Bacharach. He has also appeared in the jazz world with renowned diva, Su Cruickshank and popular violinist Ian Cooper.

Glenn recently recorded his fourth CD for EMI with the Three Irish Tenors and has made other recordings at the Sony Music Studios, including two Japanese music albums. His latest eagerly awaited solo album, "A Personal Collection", has just been released to rave reviews.