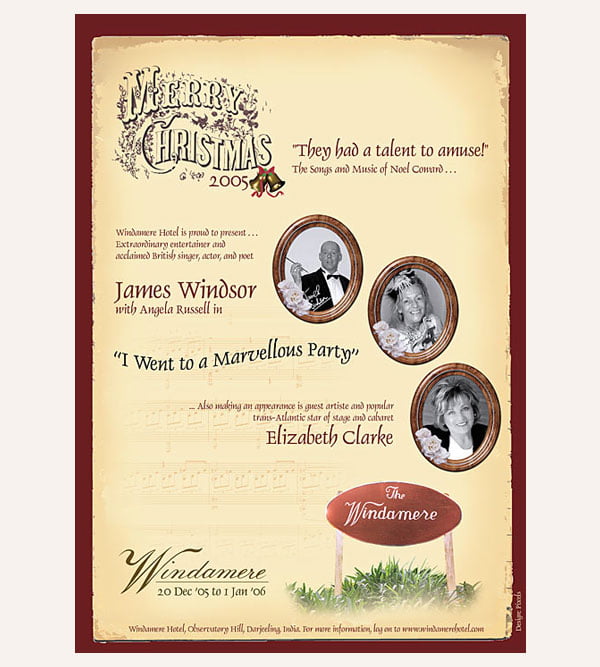 I Went to a Marvellous Party

"They had a talent to amuse!" - The Songs and Music of Noel Coward ...

Windamere Hotel is proud to present . . . Extraordinary entertainer and acclaimed British singer, actor, and poet James Windsor with Angela Russell in "I Went to a Marvellous Party".… Also making an appearance is guest artiste and popular trans-Atlantic star of stage and cabaret Elizabeth Clarke. 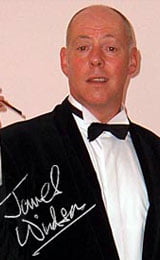 A wonderful theatrical career was foreshadowed in 1977 after his much praised portrayal of 'Moritz' in 'Spring Awakening', a student production at Essex University where James was studying for a Master Degree in Theatre.

The Student director of this production was the 18 year old Nick Dear later to be an award winning author for both the Royal Shakespeare Company and B.B.C. television. In his first job 'Ice Station Zero' the director was none other than the renowned British actress Sue Johnson!

Coming to London to play Jimmy in Mahagonny with Dagma Krause and the musical director Jason Osborn.

In later work with Avon Touring Company, he appeared in productions directed by Tim Albery, now renowned for his opera direction at Covent Garden and a recent Ring Cycle. Parts included, 'Guardiano' in 'Women beware Women', and 'Richard II' at the Edinburgh Festival.

After playing 'Peter' in 'Jesus Christ Superstar' and understudying 'Joseph' in 'Joseph and the Amazing Technicolor Dreamcoat', he played Heir Schlick in a sumptuous revival of Noel Coward's 'Bitter Sweet' with an International caste.

Other appearances in musicals include 'Scudder' in a production of 'Barnum' with Michael Crawford which opened the Manchester Opera House again as a theatre and played for six months before coming in to the West End. James learned to walk the tightrope, ride the unicycle and juggle.

Moving on to film he appeared with Sean Connery, in the film 'Sword of the Valliant'.

On BBC TV he played 'Johan Johan' in the 'All The World's a Stage', in an episode featuring Jeremy Irons as Hamlet.

He has written an acclaimed play for Beryl Reid broadcast on Radio 3.

James is an award winning poet and tours with a group of actor poets called 'The Poetry Show' and recently appeared with them at The Old Operating Theatre, The Poetry Society, and was invited to perform at Glastonbury this summer, where he was also billed alongside the poet Carol Ann Duffy for his one man show on Derek Jarman.

Angela was born in Yorkshire, started playing the piano aged seven and studied with a protegé of the great Solomon.

Early on she participated in many 'Victoriana' evenings playing Liszt, Chopin and Brahms Hungarian Dances for two pianos four hands with her teacher.

She has been everything from a Church Organist to a Dance Band pianist!

Whilst in Yorkshire she played in and was deputy MD for the Musical 'Pickwick' starring Adam Faith and Dennis Brandt.

Coming to London she has held residencies from the Medeival Banqueting Hall, St. Martin's Lane to Londonderry Hotel, Park Lane.

MD for a new musical written by Peter Sander and Bill Owen, the well loved star of 'Last of the Summer Wine'.

She was a co-founder of the famous cabaret group 'The Sadista Sisters' which went on to a successful recording career.

She comes to the Windamere Hotel, with a few feathers in her cap!

Elizabeth started singing and acting in England when she was seven years of age - largely due to a speech impediment and a big voice trying to get out of a little girl! Her mother would take her to the Saturday matinees of the local operatic societies in the area and she just knew that some day she would be on that stage! Some of her major lead roles in musicals in the UK list as: Desert Song; Hello Dolly; The Quaker Girl; Guys and Dolls; Call Me Madam, Song of Norway.

Plus many, many plays, including: Charley's Aunt', 'Our Town' and 'Shop at Sly Corner'.

She also led a busy life in the famous clubs of Northern England, where she was involved in cabaret and also a revival of 'The Old Music Hall' in London. Engagements took her away to  Ireland   and   the   Channel Islands, where she appeared with some of the leading stars of the big club scene. One of her biggest coups was appearing with the well known comedy act, 'Little and Large' in the 'The Talk of the North Dinner Theatre' in Manchester.

When she arrived in Canada, she was invited to join the 'Gilbert and Sullivan' Society and was a leading player in the light opera and musical comedy shows. Some shows in which she starred were: The Merry Widow; My Fair Lady; The King and I; Bells are Ringing; Mikado; La Belle Helene; Man of La Mancha; Pinchpenny Phantom of the Opera.