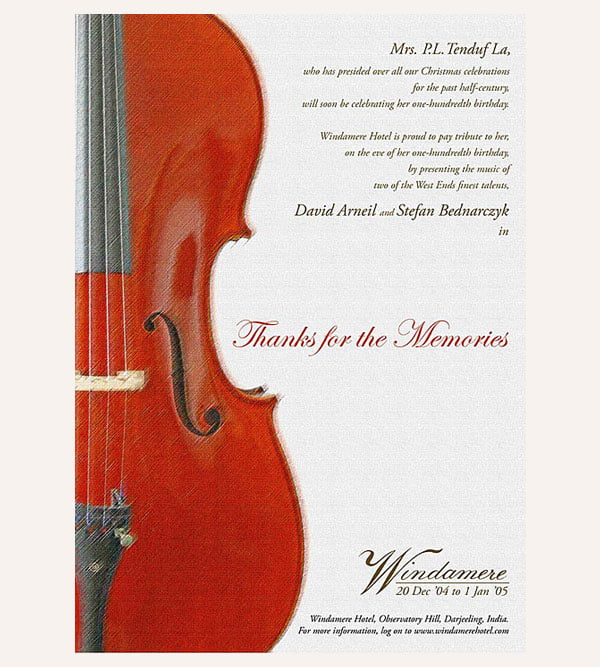 "Thanks for the Memories"

Mrs. P.L. Tenduf La, who has presided over all our Christmas celebrations for the past half-century, will soon be celebrating her one-hundredth birthday.

Windamere Hotel is proud to pay tribute to her, on the eve of her one-hundredth birthday, by presenting the music of two of the West Ends finest talents, David Arneil and Stefan Bednarczyk in "Thanks for the Memories". 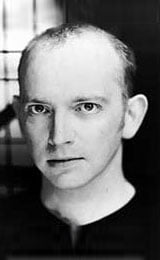 David trained as an actor at the Royal Scottish Academy of Music and Drama Glasgow.

For the Royal National Theatre, he played the MC in Oh What A Lovely War, James and Charles Edward in the Olivier Award winning Candide, Macfinch in Money, Semyonov in Summerfolk and Pinhead in The Villains' Opera. He also appeared there in Chain Play which celebrated 25 years of the National on London's South Bank.

In the West End, he has appeared in Les Miserables and Which Witch, Always, Out of the Blue and Napoleon which led him to be interviewed for the BBC Radio 4 series Fabulous Flops! His British regional appearances include Me and My Girl, Assassins, Annie and Whistle Down The Wind.

His cabaret appearances include his own show on London's Battersea Barge and Build Me a Bridge at both London's Bridewell Theatre and Don't Tell Mama in New York.

This Christmas will see him in the spectacular movie version of Andrew Lloyd Webber's The Phantom of the Opera.

He is absolutely thrilled to have been invited back to The Windamere where he last performed for the Millennium celebrations in 1999/2000. 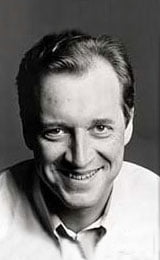 It is difficult to characterize Stefan Bednarczyk, the artiste, because of his versatility. He took an honours degree in music at Oxford: so is he a musicologist? Or, is he a performer on radio, TV and film? Is he a man of the theatre, perhaps a stage actor? In fact, Stefan is all of these and more: above all, he is an entertainer. Three of his one man shows have taken him to the Edinburgh Festival, New York, Los Angeles, San Francisco and Cannes. His one man show based on the works of FLANDERS AND SWAN took him from the Jermyn Street Theatre in London to Antibes, and then to Monaco where he recently performed for Princes Rainier and Albert.

His BBC radio credits include: Now We Are Seventy; Friday Night Is Music Night; and Midweek. Recordings include: Live At The Morgue; and Shakespeare: The Animated Tales.