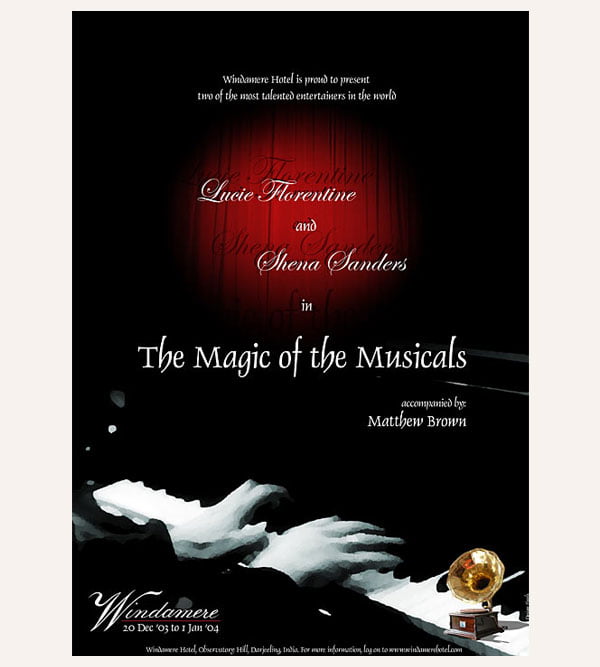 The Magic of the Musicals

Windamere Hotel is proud to present two of the most talented entertainers in the world Lucie Florentine & Shena Sanders in "The Magic of the Musicals" accompanied by: Matthew Brown 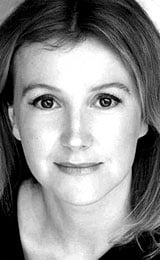 Lucie was born In Worcester and raised both in England and France. She trained at the Arts Educational School in London after which she returned to France as a Can-Can Dancer at the Famous Moulin Rouge in Paris.

Whilst there she appeared weekly as a Singer and dancer on France's most popular television variety programme, "Jacque Martin" and made a feature film starring Jeff Goldblum and Bob Hoskins called "THE FAVOUR, THE WATCH AND THE BIG FISH".

1990 saw her return to the UK to appear with Marti Webb in three national tours of "THE MAGIC OF THE MUSICALS" culminating in both TV and Radio broadcasts for the BBC.Since settling back in England, Lucie has diversified into   concerts,    promotional  work   and   more musical theatre, including choral productions at the N.E.C. in Birmingham and a number one tour of "ME & MY GIRL" where she regularly played the role of lady Jacqueline opposite Gary Wilmot. For the Open Air Theatre, Regent's Park, Lucie played Suzanne Duval in "PAINT YOUR WAGON", Juno in "THE TEMPEST" and The Nun plus understudying Adriana in "THE COMEDY OF ERRORS" Lucie aIso played as Lady Joy in "JOEY AND GINA'S WEDDING" at the Cafe Royale, Piccadilly Circus.

Even more recently Lucie was at The Crucible Theatre in "MY FAIR LADY" playing the role of Loie Fuller, in the West End at the Theatre Royal Haymarket.

Playing Janice and cast in "EDNA THE SPECTACLE" and after choreographing and playing the role of Prince Charming in "CINDERELLA" for the Com Exchange in Newbury, Lucie went on a world cruise on the QE2 working on shows like "SOME ENCHANTED EVENING" and "OLD TIME MUSIC HALL" to great success.

Lucie is thrilled to be performing at The Windamere. 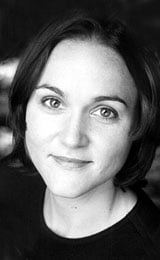 This is Shena's second visit to the Windamere Hotel and she is very excited to be returning to such a wonderful and special place! Shena is from Sydney, Australia and has had a professional career that has taken her all over the globe. Having trained at Australia's foremost Musical Theatre School, W.A. Academy of Performing Arts, she lauched her career with an Australian, NZ and Asian tour of The Music of Andrew Lloyd-Webber starring Anthony Warlow and Sarah Brightman. She understudied Ms. Brightman and sang opposite Mr. Warlow performing solos from Phantom of the Opera, Evita and Tell Me on a Sunday.

In Australia Shena performed in Rodgers and Hammerstein's   A Grand  Night for  Singing  and David Atkins. Hot Shoe Shuffle where she understudied and playedthe role of April opposite David. She was then asked back to sing April's big band numbers with the Hot Shoe boys to support Michael Crawford at the new Lyric Theatre for the opening of Sydney's Star City Casino.

Shena then found herself back in NZ and Asia playing the Narrator in Joseph & His Amazing Technicolor Dreamcoat. It was during this tour that she met her talented partner, Matthew Brown, and has enjoyed working with him on many occasions since.

Shena joined Auckland Theatre Complany to play Frenchie in Cabaret and Rapunzel in Into The Woods. After a treasured experience of singing in India over the Christmas of 2000 she stayed in NZ for one last show, Blood Brothers, before moving across the world to London. Ironically her first engagement was to sing in the Caribbean aboard the Norwegian Sky where she and Matthew met the wonderful Lucie Florentine. Here she performed in Cameron Macintoshls Hey! Mr. Producer, Runnin' Wild and Sea Legs Cirque.

Shena is not only excited to be back at the Windamere but also to be singing again with Lucie and her favourite accompanist! 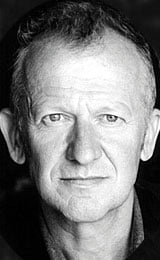 Matthew was born in the UK and raised in Malaysia and New Zealand. In a 25 year career he has created music for theatre, television, radio, film, galleries and installations. Matthew has performed live in bands, orchestras and jazz groups. He is a sought after accompanist for singers but is also known for his expressive and creative solo piano performances.

More recently Matthew became the resident musical director for New Zealand's highly successful Auckland Theatre Company. Productions include The Rocky Horror Show, Hair, Into the Woods, Cabaret and The Wind in the Willows. For commercial theatre Matthew  musically directed  Blood  Brothers and toured NZ and Asia with Joseph and his Amazing Technicolor Dreamcoat, Phantom of the Opera, The Secret Garden, Cats and Evita.

Now resident in London he is producing recordings by such artistes as Lucie Florentine and Shena Sanders, as well as writing, arranging and acompanying peformers in London.

Matthew first performed at the Windamere in 2000/1 with his partner Shena and longtime colleague Grant Bridger and is delighted to be able to visit once more and perform with these two enchanting ladies.