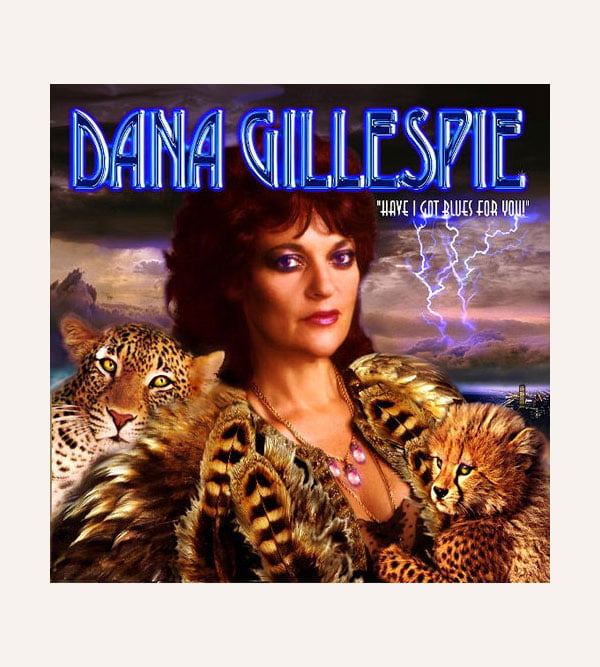 "It's an index of Gillespie's empathy with her material that the originals blend so seamlessly with the classic covers... that's no mean achievement...[she] literally beats the pants off anything done by a British bluesman these last 10 years." Charles Shaar Murray, Essential Blues On CD

"I believe the blues should be sung by an older person because it's about emotions and experience. I couldn't do justice to it when I was younger because my voice didn't have the edge it needed to  convey  the  emotion, nor did I have the first hand experience to sing about blue themes convincingly. "But after 38 years in music and 37 albums Dana Gillespie is well qualified to sing the blues.

Whilst there she appeared weekly as a Singer and dancer on France's most popular television variety programme, "Jacque Martin" and made a feature film starring Jeff Goldblum and Bob Hoskins called "THE FAVOUR, THE WATCH AND THE BIG FISH".

A career that combined radio, theatre, film and sport (she was once British junior water-skiing champion) with music, Dana has been in the public eye since recording her first album at the age of 15 .Her music has evolved from folk in the 60s through 70s Bowie-esque glam-rock to the raunchy in-your-face blues she performs today. Her new album, the aptly titled "Experienced" is released at the end of March. It has 12 songs, 11 of which are self-penned. Rolf Harris features on two titles, playing the wobbleboard and eefing.

Dana Gillespie has been dedicated to the blues from an early age: "I discovered the blues when I went to the American Folk Blues Festival in 1962 and also to see the Yardbirds at the Marquee Club. I was in my early teens and hadn't heard anything like it before - blues wasn't easily available in the UK back then". Bessie Smith especially inspired her because of her combination of sly, funny and bawdy lyrics. "Blues was my first musical love because it's earthy, spiritual and honest."

In 1964 she recorded for Pye, with Donovan on guitar and became a regular on the folk circuit. She recalls: "[at that stage] I was doing folk because I couldn't afford a band and I hadn't found my musical niche". In those early years Dana got to know many of the top bands and people in the music business. Most shared her love of blues, and played their own version of it. Bob Dylan who was an old friend of Dana from the 60s showed interest in her music in 1997, when he invited her to support him on his UK tour, which included a sell-out show at Wembley.

Her own preference for that kind of music was tempered by the fact that most of her managers did not really know how to handle her emergent talent. After a swathe of singles on Pye and two LPs for Decca, she moved to RCA and made "Weren't Born A Man" in 1973, some titles being produced by David Bowie, whose management, Mainman, also took care of her career.

While her career in music was simmering away, she became better known for her appearances in London's West End theatres, in shows such as the first run of Jesus Christ Superstar (playing Mary Magdalene), The Who's "Tommy" (playing the Acid Queen) and the rock Othello, "Catch My Soul". She also co-stared with Dudley Moore in the film version of "The Hound Of The Baskervilles" and stared in Ken Russell's "Mahler" among other movies.

Her second RCA LP "Ain't Gonna Play No Second Fiddle" was just beginning to take off when her management company decided she should move to the USA, where she played and toured extensively for two years. Dana hosted a radio blues show in New York at the same time, which gave her the opportunity to learn more about the roots of the music. She has continued her interest in radio in Austria where she recently completed a 11-year stint hosting a weekly, international world music show on Blue Danube Radio called "Globe Trotting With Gillespie".

In the 80s, Dana toured Europe several times with the "Stars Of Boogie Woogie" tour, singing either with the Mojo Blues Band or with Axel Zwingenberger. Her time with the Mojo Blues Band, a purist outfit that backed all the American blues musicians visiting Europe, lasted three years. "I lived, slept and breathed blues, because that was all they did. It was a great experience."

She also developed her interest in Indian and Arabic music, recording the single 'Move Your Body Close To Me', an Indian-influenced song with synthesiser backing. It shot to #1 in Europe. Consequently, Dana split from the Mojos to explore the pop and record her two Bellaphon albums, "Solid Romance" and "It Belongs To Me".

Dana has already released three blues albums through Ace. "Blue Job", was recorded in 1982, a collection of blues songs with a humorous risqué twist. The second LP, "Below The Belt" drew on the same source, and was produced by Mike Vernon (who also produced Dana's Pye album in the 60s, "Box Of Surprises"). The third LP, "Sweet Meat" concentrated on "fat" and "thin" numbers - another raunchy set of songs. The combined three LPs are now available on two CDs "Blues It Up" and "Hot Stuff".

During the 90s Dana released 14 albums, recording three in Sanskrit, under the artist name Third Man. Her touring schedule has been consistently packed, taking her to all the European blues festivals. In recognition of her talent, she was voted Top British Female Blues Vocalist by the British Blues Connection and Blueprint Magazine between 1992 and 1996 and has now been elevated into their Hall Of Fame.

In the last week of January, for the last five years, the Caribbean Island of Mustique has been the destination for a charity blues festival, founded and organised by Dana. The festival started as a small event but as Mustique has grown in popularity, as a tourist destination and as a playground for the wealthy, so has the festival. The funds collected are used to pay for education on the poorer neighbouring island, St Vincent. Dana maintains that the event will continue to be a free festival, raising money through the sale of the Mustique Blues Festival Live CD produced every year. Blues musicians from all over the world, such as Big Jay McNeely and Larry Garner, perform at the festival.

A French musical prodigy, Julien, 22, burst onto the professional circuit in the last year. He recently toured Europe with Big Joe Turner.

A member of Dana’s touring band for the last 18 months, Fred has also recorded with Dana.